December 19, 1843 was the day when Christmas was given a gift that continues to keep on giving.   “A Christmas Carol” by Charles Dickens was published in London by Chapman and Hall.  To be clear, others had written stories and poems about Christmas, but “A Christmas Carol” was different; for in those marvelous staves, Charles Dickens spoke to the heart of poverty, despair, and the plight of young children.  Best of all, he offered redemption to a world longing for fairness and compassion.

“For it is good to be children sometimes, and never better than at Christmas, when its mighty Founder was a child Himself.” Charles Dickens, A Christmas Carol

Charles Dickens wrote from bitter experience.  In 1824, when only 12 years old, he saw his father, along with his mother and young siblings, incarcerated in the dreaded Marshalsea Prison for debt to a baker.  To support his family and pay for his lodgings, Charles left school to work 10-hour days in a boot-blacking factory. Outside of work without the benefit of family, he roamed the street, exposed to danger and exploitation.  These traumatic events left an indelible influence that would later be validated in his brilliant characters and narratives.  The strength and endurance of his message was embedded within the struggles of ordinary people.

Every year, upon entering December, I listen to a reading of a Christmas Carol.   My favourite reader of A Christmas Carol is Stephen Humphreys, husband of my dear friend, Liz Humphreys, from the blog, Leaping Life.

According to Liz, one of Stephen’s favourite annual traditions is to read “A Christmas Carol” by Charles Dickens. Sometimes it is just to himself. Sometimes it is a special treat for her to hear him read out loud while she knits.

Last year, Stephen shared his reading of A Christmas Carol via Anchor and Spotify. In his podcast blurb, Stephen says

“For the best part of the last thirty years, I have read A Christmas Carol in the days before Christmas each year.  Last year my wife asked me to read it aloud to her.  At her suggestion, I have done so again in this podcast.  I hope you will enjoy the journey with Ebenezer Scrooge as he is visited by Three Spirits at the intercession of his dead partner Jacob Marley.  I profess no great acting skill, but I do hope my love for this book comes across in the telling.” Stephen Humphreys

I invite you listen as Stephen reads this unforgettable story. 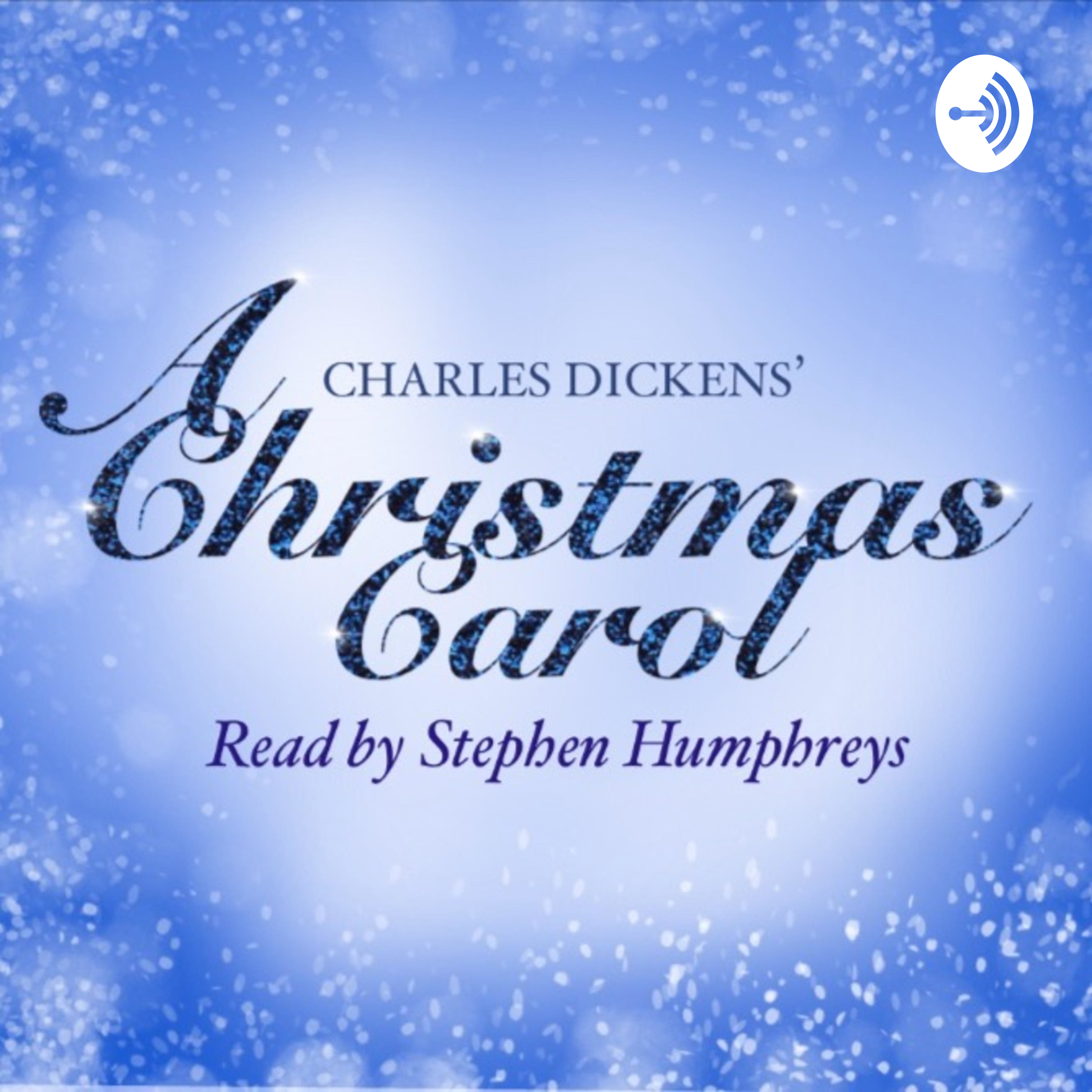 For the best part of the the last thirty years I have read A Christmas Carol in the days before Christmas each year.  Last year my wife asked me to read it aloud to her.  At her suggestion I have done so again in this podcast.  I hope you will enjoy the journey with Ebeneezer Scrooge as he is visited by Three Spririts at the intercession of his dead partner Jacob Marley.  I profess no great acting skill, but I do hope my love for this book comes across in the telling. Merry Christmas

This is such a great tradition. I am glad Stephen recorded it for the rest of us to enjoy.

“As referenced in Michael Patrick Hearn’s The Annotated Christmas Carol, Dickens attended the same St. Patrick’s Day party as one Dr. Miles Marley. Knowing Dickens’ interest in unusual names, Dr. Marley remarked upon his own unusual surname. Dickens’ reply: “Your name will be a household word before the year is out.”

What a wonderful tidbit.

I love those tidbits, don’t you? It is the trivia that make everything so extraordinary! Hugs!

I am delighted that you joined me in listening to this marvelous story. As Charles Dickens wrote in A Christmas Carol: “There is nothing in the world so irresistibly contagious as laughter and good humour.”

I remember listening to this last year while I wrapped presents!

What a great idea!! Stephen has a brilliant reading voice, doesn’t he?

Thank you for this informative and heart-warming post on the history of the Christmas Carol, Rebecca!

I am delighted that you joined me to hear the reading of A Christmas Carol, Peter. I love hearing about the background of stories and books. There is always a story behind a story. Many thanks for your visit and comments!

What a classic, Rebecca, and thanks for sharing his history which I wasn’t aware of. Stephen’s voice is perfect, so I can see why you wanted to share with the rest of us. Unfortunately, Christmas and the holiday season is not joyful for everyone. I love this time of year, but it is hard to feel truly happy when so many others are suffering. I think we need to do what we can to make a difference, and then feel the joy within our own lives with family and friends.
Wishing you a wonderful holiday season, Lauren 💞

Thank you Lauren for your heartwarming wishes for this holiday season and for adding your insights into this discussion. Stephen is a stellar reader and I look forward to his reading in the days ahead. What I love most about A Christmas Carol is that compassion is for all days of the year. That we can share happiness and joy with others in a world that faces complex challenges and very difficult moments. As Robbie Cheadle reminded me, happiness comes when “I” becomes “we.” I am grateful for kindred spirits who light my journey.

“And it was always said of him, that he knew how to keep Christmas well, if any man alive possessed the knowledge. May that be truly said of us, and all of us! And so, as Tiny Tim observed, God bless Us, Every One!”

Thank you, Rebbeca. I wish you a very Happy Holiday.

I am delighted that you stopped by, John. Many thanks for your visit and comments.

He ought to be on stage, Rebecca. Hahah.. So enjoyable!

I agree, Carolyn!! Very well said. All the very best of the holiday season to you and yours.

And to you and yours, Rebecca, a wonderful Christmas season!

He has the perfect voice for this wonderful (and enthusiastic) reading of the last pages of A Christmas Carol!
Thank you!

I agree Mary! Stephen brings us vibrant spirit Christmas via his reading of A Christmas Carol. Many thanks for your visit and comments – very much appreciated. All the very best of the Holiday season to you and yours!

That was so cool, Rebecca. a huge thank you to Stephen for that read. And thanks for the little history lesson on Dickens and the source of his inspiration. So tragic. It breaks my heart, and it explains why poverty, specifically when it comes to children, is such a strong theme in his books. A great holiday share. Thank you. ❤

I am delighted that you are enjoying Stephen’s reading of “A Christmas Carol,” Diana! Dickens lived in a time of enormous change, brought about by the Industrial Revolution. I have read that employers thought of their workers as tools as interchangeable as any nail of gluepot. Dickens read the testimony of girls who sewed dresses for the ever increasing market of middle class consumers. The hours were unbearable. One of these girls was Martha Cratchit!! A Christmas Carol continues to hold relevance today as we enter what has been called the 4th Industrial Revolution. I believe that writers are an invaluable resource – they tell the story of our generation. Many thanks for what you do. All the very best of this festive season to you and yours!

We are certainly entering a time of economic disparity and a test of capitalism. So many people live at Dickensian poverty levels right now. My guess is it will be unsustainable, but we haven’t reached the tipping point yet.

Hi Rebecca, I listed to the first 5 minutes and I do like Stephen’s reading voice and style. I shall come back and listen to this over the next couple of weeks.

I knew you would like Stephen’s reading. He has a marvelous voice that entices us back into the time of Charles Dickens.

So atmospheric. Christmas is not my favorite holiday, I admit, but I feel like reading this story. Thanks for sharing the audio. Wishing you a luminous holiday!

Many thanks Julie. A Christmas Carol has always fascinated to me. How could a narrative change a society’s value so quickly and continue to endure to this day? Charles Dickens will be forever linked to Christmas.

I smiled when I read that Dickens was in immediate need of a cash injection at the time. A Christmas Carol sold 6,000 copies in its first week in print and 15,000 in its first year. It seems that Dickens did not derive the monies that he thought he would. Instead, he changed the Victorian view that prisons and workhouses were enough social aid for those in poverty. This is a message that every generation needs to hear.

The forecast is for snow in the next day! Looking forward to a walk in the forest!

[…] If you are interested in listening to A Christmas Carol beautifully read by Stephen Humphreys, you will find the links on Rebecca Budd’s blog: Clanmother: https://clanmother.com/2021/12/07/stephen-humphreys-reads-a-christmas-carol/ […]

Many many thanks for sharing this brilliant reading of the Christmas Carol by Stephen Humphreys!

Merry Christmas Rebecca and Don. Hugs on the wing!

Merry Christmas Teagan! We had snow on Christmas Day so I was out taking photos with my cell phone. It was a perfect “Dead of Winter” day. My Christmas present to my self was to purchase the last of the Dead of Winter series, which is up to book 12! I am excited!!!

You are so kind, Rebecca. I enjoyed thinking of you photographing your white Christmas.
High winds instead of snow here, and clouds. But I’m happy to have this green & brown Christmas. LOL.

May the lights of Christmas be your guide, and the Christmas carols fill you with cheer.

Many thanks, Kelly! I am delighted that you stopped by and for your comments. All the very best as we enter 2022!!

You are never, ever late, Resa. That is why I love blogs – they are always there to access and enjoy over and over again. Whenever I see a new post on your blog, I also go back to previous posts of yours at the same time. You always welcome me to your place! Sending hugs back!!