Anyone use a drum as a communication device? How about fires, smoke signals, the pony express? How many are glad that the printing press was invented?   Recently, I met with some friends and the discussion turned to the use of texting. Some people liked the idea but others were less than enthusiastic. How could texting be a form of communication? Where was the art of conversation?  Alive and well – just evolving.

Nielsenwire published a report in 2010 on U.S. teen mobile phone usage which suggests that texting has become more popular than calling.  Here’s a quick rundown on American teens, which is based on 1) data obtained from the monthly cell phone bills of 60,000 + users and 2) data surveys from over 3,000 teens:

A couple of weeks ago, I bought a phone that was text-friendly. I realized, even without statistical evidence, that texting was  efficient, cost-effective and an immediate response system. Why was I hesitating? My 81-year-old mother, who has been texting for over 2 years, was way ahead of me. If I want to keep in touch with my son, nieces, nephews, tech-savvy friends and yes, my mother, I better catch up – fast. The good news, texting is easy!

John Powell, scientist and musician said, “Communication works for those who work at it.” Staying connected may take a little effort, but it is time well spent. 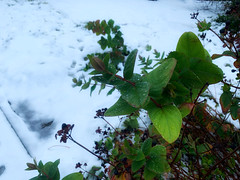 My Tuesday thought! “It is during our darkest moments that we must focus to see the light." Aristotle
January 25, 2020 Celebrating Robert Burns with a special edition of Tea Toast & Trivia podcast. Thank you for listening in. Link in my bio. Should auld acquaintance be forgot, And never brought to mind? Should auld acquaintance be forgot, And auld lang syne! For auld lang syne, my dear, For auld lang syne. We'll tak a cup o' kindness yet, For auld lang syne.
Join Sarah, Frances and me on our latest podcast on Fashion, Closets & Organization and how this trend plays out in in our reality. Click the link in my bio. #teatoasttrivia #fashion #fastfashion
“My heart is warm with the friends I make, And better friends I'll not be knowing, Yet there isn't a train I wouldn't take, No matter where it's going.” Edna St. Vincent Millay, The Selected Poetry
Books! Books & more Books. Linking Vancouver with New Jersey. Join the Podcast Conversation with Dave Astor and Rebecca Budd on Tea Toast & Trivia. Find the link in my Bio. #podcast #teatoasttrivia #books
Looking forward to Robbie Burns day! January 25, 2020 “There is no such uncertainty as a sure thing.” Robbie Burns #robbieburns #robbieburnsday
%d bloggers like this: